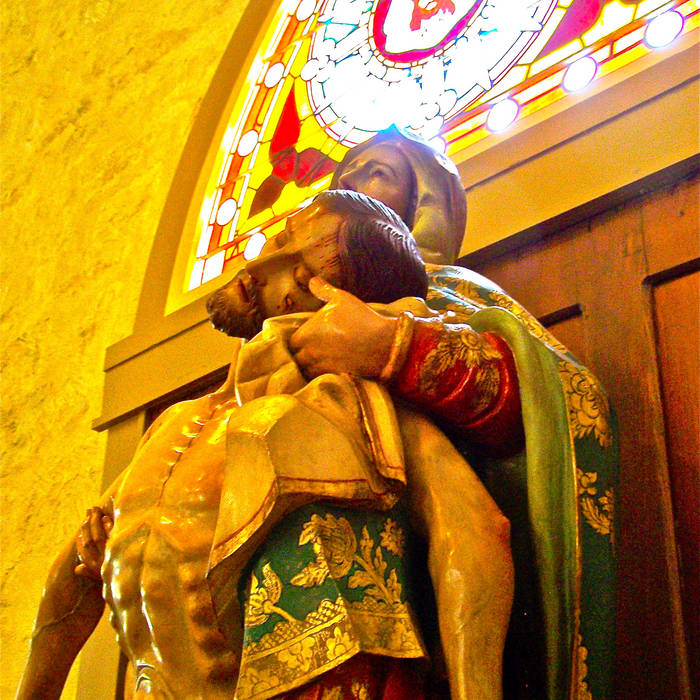 "Road songs" have become "Life songs" for me. Travel from "A" to "B" seems to have a way of unlocking deeper parts of my spirit.

Having lived the better part of the last 20 years on the road as a "band in a van" or as a troubadour, I became immersed first-hand in what historians & writers have called, the "American Experience."

Those variables of limited resources & hard luck, when fused with faith, courage & (often) sheer "pluck," were vital to transforming this great country. The idea that we could all dream and find ourselves a "lil' part of Heaven," initially "looked good on paper." We had, so to speak, a lot to work with here. The grandeur and resources of such a land as ours is, to my mind, unrivaled in the world.

We all play out a certain drama:
We learn the ropes of life.
In doing so we learn of our own gifts and our weaknesses.
We are thrown back (like it or nay) on something larger than ourselves.
We try to bet on hope in the face of grief.
We champion courage while attempting to keep despair at bay;
...and we take a stoic stock in a sober faith that "it's all going somewhere."
Those ancient stories and myths you try to make your own.
Call it naive. Call it infantile; Call it uninformed, it is, nonetheless the "Faith" we have cobbled together from our American Experience.

It is this "faith" that attracts me to a guitar, and the possibility of a song being born. Of something coming to life.

If we "dare to look it in the eye," this raw energy of our individual lives, dreams, and struggles, we will have more than enough "grit" to make for great songs. Whether it's themes of heroes, thieves, lovers, villains, misers or the "down-&-out," it has been such experiences that have informed my world without...but mostly my world within;

Early on in my life, i was deeply aware of a universe that was full of great beauty, joy & hallowed-ness. Still, such beauty (earthly or heavenly) comes to us in fits and starts. It introduces itself in such fragility and vulnerability that it appears tentative, even disposable.

We are victims of all that seen (as opposed to the unseen, even in ourselves.) Fear drives us to soul-less solutions. People get hurt. In our mad rush towards materialism as "individuals" we are easily seduced at the altars of wealth, success and violence. People and things are deemed, "expendable." Even our relationships become defined in terms of "Gain vs. Loss."

Having lost touch with things of Spirit, we tend to devalue that hallowed-ness in the world. We miss such hallowed-nes in our neighbor and sadly, even in ourselves. We miss Spirit, ignore it and (often,) ruin it, by our own devices. Though outwardly we appear to "have it made," we are often become living beings, lacking a pulse...running on empty.

I count myself in such a category, punctuated with the occasional "mini-epiphany." Perhaps we all live at such address.
That "almost but not quite" aspect of our lives.

And, if by chance, we should wake up to that "larger, brighter world," embrace it, cultivate it and above all: Chalk it up humbly to grace.
And that "not of thyself."

And for those of us who still walk wounded, lingering in the twilight? Well, "be ye kind, tender-hearted & forgiving" to the rest of us.
Such displays of virtue may be the only "sighting" of that larger, brighter world we "unbelievers" will ever see.

Maybe that's what these songs for the journey & beyond are all about.
Joy & courage on yours, dear friends,
bill mallonee

Bill Mallonee is an Americana artist w/ 75 plus albums over a 25 year career. Voted by Paste Music Magazine #65 in their "Top 100 Living Songwriters" poll. He was the
founding member of Vigilantes of Love. He has worked with Mark Heard, Buddy Miller, Emmylou Harris, & Peter Buck from REM.
His most recent work, "The Rags of Absence" released in Jan. 2017. ... more

Track Name: CALIFORNIA WAVE
CALIFORNIA WAVE words & music: bill mallonee
No, it's never been a problem
For me to light up a stage
i could ride that moment
like a California wave
make you glad to be alive
next moment break your heart
but it's when those big lights went out
well, that where the problem starts

you'll go back to your fine homes
with some new stories to tell
and me? well, i'll just crawl back
to a lonely motel
with a bottle as an only friend
after all's been done and said
with Gideon's Bible
in a drawer beside my bed

now, I musta left a part of me
way back there on this ride
now, the mirror, she's like a camera
and you know cameras' never lie
No, it's never been a problem
for me to light up a stage
Hey, i could ride that moment
like a California wave
like a California wave
Track Name: BARSTOOLS & BAGGAGE (Debtor's Soul)
BARSTOOLS & BAGGAGE (DEBTOR'S SOUL)
words/music: bill mallonee

Now there's the sound of your wounds you keep tryin' ta' keep hid
there's the sound your dreams make....hittin' the skids
mile marker countdowns and the rooms where we grieve
where we all meet for a moment...and try to believe

CHORUS:
Barstools and baggage
happy hour language
hey, look in the mirror
Everyone i know
has gotta debtor soul.....in here

when the well of good luck has long given out
It's as dry as an East Texas drought
string it together, kid, all your bailing wire dreams
and those wasted, rusted-out-might-have-beens

fillin' up the spaces with empty lies
tryin' not to over romanticize
you and me babe; we can get through this
little prayer whispered through a whisky kiss

When guard rail emotions, they won't ever bear the load
guitars sleep in cases after the show
'Tween Heaven and hell and sittin' on the fence
I've been haunted by 'em both ever since
Track Name: PILLOW OF STARS
PILLOW OF STARS (FATE & SAD REVERSALS)
music/lyrics: bill mallonee

pass me that paper n’ pen
and shot to boot
let a dreamer preach a sermon
and a fool speak half-a heart full
chorus:
and baby, when you love...
ya’ find out who you are
wherever you lay your head...
may there be a pillow of stars
and though fate and sad reversals
may slow your journey home
you’ll get there cause that deal was done...
a long, long time ago...

And what cha said with your eyes
was more n’ you wanted to speak
my, my, how we use these stammerin’ tongues
to steady stumblin’ feet

I dunno why I rock this way
or why I roll with such an art
dunno why speak these words
to break my own heart
Track Name: BOTTOMING OUT
Bottoming Out words/music: bill mallonee
Guitar player, country band
too long waiting for the ship to come in
record scout said he liked our sound
pulled some dust from his bag and he bought us another round

It ain't nothing like Carolina
not a bit like Tennessee
now, i'm a million miles away
from folks who care for me

chorus:
they knew for the fool i was
and still didn't give a damn
they loved me...ah, well, just because
they took me as i am

I always listened to what momma said
about the wolf being at the door
and daddy? He drenched the land with sweat
sometimes i think he didn't know what for

And my path took me to travelin'
with a guitar from coast to coast
It's too easy to forget
the ones who loved you the most
Now the folks in Carolina
and those good ones o'er in Tennessee
you might say they got all the goods
...and the lowdown on me

chorus:
they knew for the fool i was
and still didn't give a damn
they loved me...ah, well, just because
they took me as i am

baby, we all wind up here
by many paths no doubt
and me? well, i just sorta stumbled in
to see what all the fuss was about
Some God-forsaken watering hole
they called the Poison Well
(It was) one more round after one more round
of anything that they'd sell....

Now there'll be hats you'll have to try on
ah, maybe a conscience to dismiss
smiles you'll have to fake
and so many asses to kiss
and there'll demons you gotta stare down
as you pass through glitterin' doors
So many faces that you'll have to wear
till you won't know which one is yours

CHORUS:
cause, you know when you are thirsty
you'll drink every drop
Then you can spend a lifetime
just trying to walk it off

Power, is a funny girl
we spent some nights along the way
and pride's a master of disguise
she answer's to many names

chorus:
And songs were just a way for me
to keep one foot from the grave
so it's frightenin' when a man of words
runs outta things to say

and the engine, she is seizing
pistons firing wrong
if mercy is a spotlight
for God's sake, turn it on

now the clock is still ticking
and i haven't slept at all
just this reoccurring dream
about walkin' down an empty hall
and every door i try is locked
but then i realize
i've gone and locked 'em all myself
and that...from the inside.
Track Name: NEW YEAR'S EVE (I CAN BARELY HEAR IT)
NEW YEAR'S EVE music/lyrics: bill mallonee

glass empties out......last grains run through
out with the old......ring in the new
time to ante-up......time to pay dues
but every time i find...ain't no nearer to you

So you try to believe...you pray and pray
my feet struck out...on the narrow way
Try as i would...try as i might
i couldn't find my name...in the book of life

Came out of a storm...came out of a dream
It all looks so easy...at 17
ah, but the skin yer in...could surely use some help
yer bound to wind up...hatin' yourself

So i traded in my "kid heart"
for this guitar and a small spark
the cards were all well marked...in advance
the taintedness of everything
it all came soaked in gasoline
and the asphalt she was beckoning
towards a different kinda reckoning
your kiss...awaken me...from this trance

Bandcamp Daily  your guide to the world of Bandcamp

Guests include Kassa Overall and Muriel Grossman, plus an LP of the week by Van Hunt.